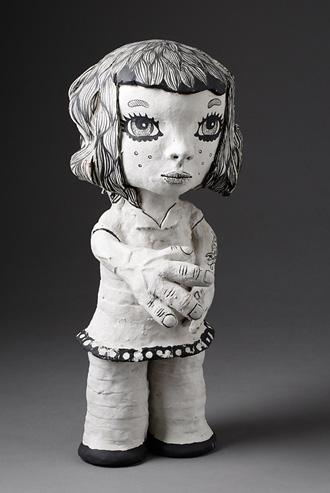 Nicolas Rousseau's works are full of icons and myths

This ceramist has quite naturally found consistency in a maelstrom of influences. He humorously describes himself as an artist who was “bottle-fed” with mangas, comic strips, genre films as well as literature by Edgar Allan Poe, or Greek mythology.

Nicolas Rousseau’s artistic path has thus been consistently intermingled with dreams and hero personae. His initially 3-D characters and chromatic carvings have taken on the form of black and white creations since 2010.

Drawn on flat tints, the super heroes and the mythical figures typically adorn steles that stand erect, which remind us of the gods from the days of our youth, or our movies heroes. Some creatures are even independent of any kind of support, coming to life just as ceramic figures. A series of dolls thus seem to pop out of their boxes just like mutating beings with contorted hands and enthralling smiles.

Nicolas Rousseau is a celebrator of mythology. He boasts playful work, both for himself when creating, and for those who take his objects home. “I am not afraid of anecdotes, and through my works of art, I tell short tales that ring a bell with everybody”. In his potter’s workshop, the super heroes from American comics may come across some vanities, or the Mexican figures of Diaz de la Muerta.

These contemporary aspirations are perfectly matched with a tradition in carrying out his work. The clay he uses comes from the area nearby the village of “La Borne “. Outlines are achieved using black oxide with a brush, and a porcelain engobe.

The effect achieved by wood stove firing at 1300 degrees enhances the mythical fire that enlivens his latest hyper-graphic creations.

Through strong and original strokes, he has gradually created a unique artistic world which is also correlated to the world of Tim Burton, The Kooples stylists, or H.P Lovecraft’s novels. His ceramic imprint will grab you and linger on in your imagination.

Selecting a ceramic piece by Nicolas Rousseau gives one the feeling of acquiring a small piece of contemporary history, of grasping a clever mix of our reminiscences and our ancient, present or future beliefs.